The Story Behind This Car in Silt Photo

This photo – a photo of a car face down in a hole – has drawn a bit of attention over the years. I’ve been contacted by various publishers, teachers, students, and geological scientists with regards to its use, including such places as the Te Ara Encyclopedia of New Zealand,  the University of Canterbury Quakestudies website, the Encyclopedia Britannica website, this National Academy of Sciences series and this video by Minute Earth for ‘The Geophysicist’. They’ve gone on to tell the story in various mediums around the world, but I haven’t really told the story myself so… now’s the time!

The Canterbury earthquakes of September 2010 and February 2011 and their resulting aftershocks were fairly unique on the global stage thanks to the incredible amount of liquefaction that they caused. The liquefaction resulted in fine silt that had to be removed by the truckload. This was more significant in the east of Christchurch, where I lived.

I took this photo on 23 February 2011 on Rowses Road, near the intersection with Shortland Street, Aranui. It was the day after the 22nd February earthquake which occurred at 12:51pm. The second of two major quakes and the one that caused such a huge amount of damage. It’s long since been paved over, but you can see the same red metal fence on the cream-coloured bricks in Google Streetview.

At this time, the previous day’s flood of water had subsided slightly. Enough to allow the silt to settle in place and lock the car into the ground. A passerby told me that a man and his dog had been in the car but both walked away. When I passed the site a few days later, an excavator had managed to tear the car from the earth, as you can see in the photos below. 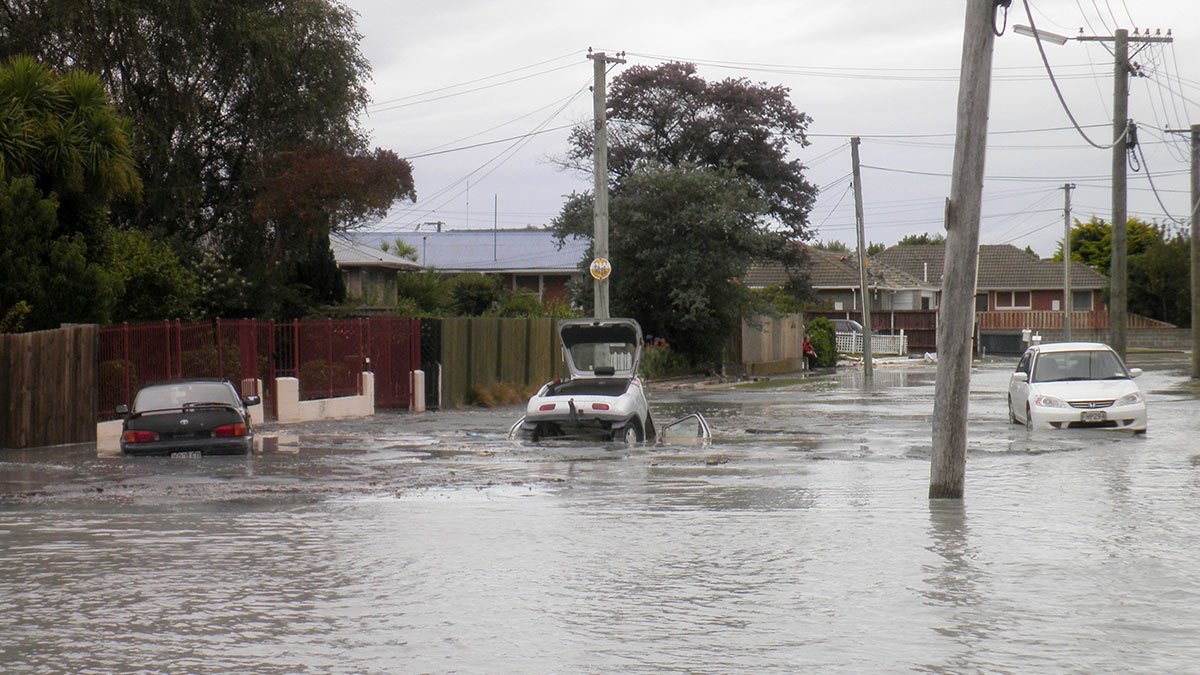 Three cars stuck in holes that have appeared on Rowses Road. In the background, a resident sits by their damaged wall. Water drained from the silt which solidified, locking this car in place. An excavator worked for hours to wrench the car free.

I was at work when it happened. Luckily my car park was right across from where I worked on Tuam Street at the time, so I could get to it quickly – the car park was just starting to flood – and start the drive home. That drive home – usually 12 to 15 minutes – took hours as I meandered through the streets in a long line of traffic, navigating carefully through floods, past collapsed buildings, and around abandoned cars.

Throughout the slow journey I made repeated attempts to call my wife, but with so much damage and so many people flooding the phone network, a connection was impossible. Worse than no connection at all, at one point my call went through and I could hear my wife but she couldn’t hear me. Assuming I was trapped in rubble and struggling to talk, she expected the worst and had to be consoled by neighbours until I finally turned up at the house.

It wasn’t until I arrived at Pages Road that I saw the first of a number of vehicles that had driven headlong into sinkholes. As areas were flooded, it was impossible to see what had happened to the road so drivers had no chance. Some residents had attempted to throw signs and other detritus into the holes to mark them (you can see an office chair floating in a hole in one of the photos on this page) but that wasn’t enough for the first unlucky drivers that had abandon their cars and wade to safety, hoping they didn’t fall further into the holes in the process.

When I turned onto Shortland Street and saw that it was flooded, I drove onto the pavement where I could at least see the ground. You can see the churned-up road-side lawns along Shortland Street in one of these photos.

There were around four or five cars, plus one truck, that had fallen into holes within the Pages Road and Breezes Road areas of Aranui, Christchurch. Other holes opened up in the road over the coming weeks as in many places the ground underneath had liquefied and drained away, leaving a precarious bridge of tarmac to form the roads above. Even a fire engine got stuck at one point. An unfortunate white station wagon driver was the first to fall into this hole. Silt settles through the engine bay, locking this car in place.

I have higher-resolution versions of the photos I took on the way home, but the photos on the days that followed were taken at my camera’s minimum resolution due to the fact that we were without power (and water) for a fair while so I had no way to power up my computer and empty the SD card. A line of traffic detours through a flooded industrial area. Someone has thrown an office chair into a hole to make it as dangerous. A truck collapsed into this hole on the corner of Breezes Road and Shortland Street.

As for the liquefaction itself, areas of east Christchurch – along with nearby towns such as Kaiapoi – were heavily affected. I’m no scientist, but my understanding is that shaking from the earthquake liquefied ground material to create a fine grey silt. This mixed with groundwater, and probably water from broken pipes, to bubble up to the surface.

As more silt surfaced, less material was left in the ground to support the roads, pavements, walls, buildings and other infrastructure above them, causing them to crack or collapse. If I recall correctly, the average height above sea level actually dropped permanently due to the amount of ground material that was removed.

Residents were joined by members of the newly formed ‘Student Volunteer Army‘ to help pile silt together ready for collection. For a lot of east Christchurch, the silt was taken to an area near the corner of Breezes Road and State Highway 74 before being carted off elsewhere. Wikipedia references ‘200,000 tonnes’ of silt being removed.

Years later, there were still cases of liquefaction damage surfacing in the media, such as in this article in 2016. For weeks after the earthquake, holes suddenly appear in busy streets with no supporting ground material beneath the tarmac. The silt collection site on Breezes Road. A mountain of silt, taller than the excavator to the left. An excavator piling silt at a site by Breezes Road. Residents and helpers have piled silt on Pages Road, ready for collection.

More Photos from the Christchurch Earthquake

I took a fair few amateur photos in the aftermath of both major Canterbury earthquakes. Many of these, along with a few videos plus the blog posts that I originally wrote for this ‘NZ Raw’ website (which I since lost and have recently created from scratch) are stored in the University of Canterbury’s Quakstudies archive.

You can also find many of these photos in my Flickr album.

If you have any questions, sing out. How To Be A Good Dad
Scroll to top